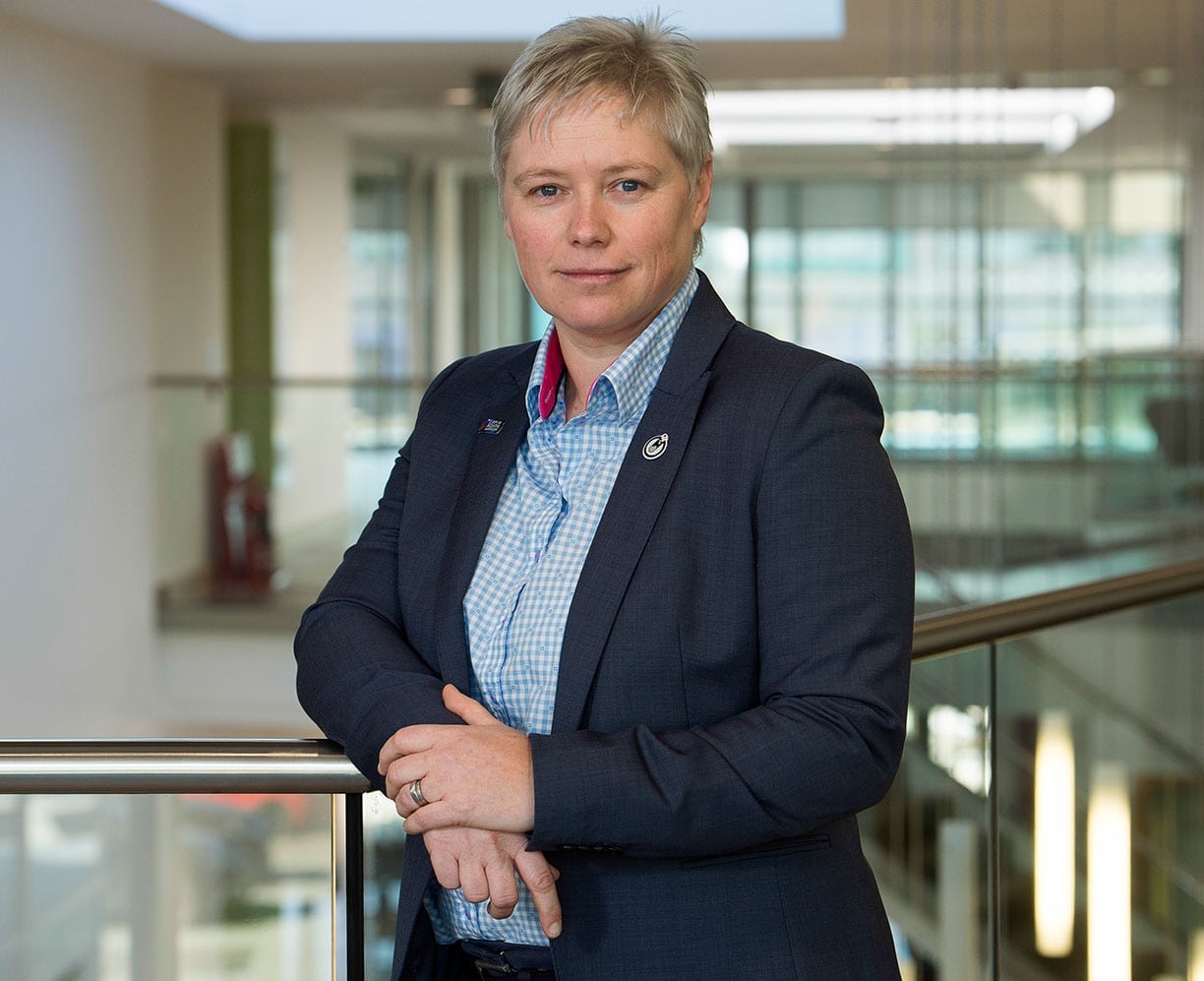 There is a widespread view that data is powering unprecedented change in every aspect of our lives. But what do the consequences of such change look like for Scotland? Gillian Docherty, CEO of The Data Lab, helps us to understand the implications of the new industrial revolution.

Scotland has a track record when it comes to industrial innovation. The first industrial revolution was driven by the steam engine, a technology famously upgraded by Scottish inventor James Watt. Electricity powered the second industrial revolution and then spawned the transistor, which made the third – digital – revolution possible. The raw material of the fourth industrial revolution, happening right now, is data. And there’s more of it around than ever before. Way more. According to Forbes magazine, more personal data was gathered in 2017 alone than in the preceding 5,000 years of human history. Using data at this scale certainly creates challenges, but it also enables innovation in ways that have not been possible until now. For Gillian Docherty, CEO of Scottish innovation centre The Data Lab, that’s an exciting prospect.

“It’s true, a fourth industrial revolution is underway, and data is the fuel that will help it succeed. It’s already having a major impact on society, but I’m an optimist, and I think the data-driven revolution presents opportunities and encourages capabilities we’ve never previously enjoyed.” Data is also fuelling advances in artificial intelligence (AI) and machine learning, and as a result automation and robotics are transforming the economy, and perhaps the very essence of humanity. However, despite familiar themes from dystopian sci-fi epics, Docherty sticks to her optimism. “It’s down to us to determine what happens and the pace at which it happens, in terms of jobs, careers, the economy, and all aspects of life.”

There have been big changes to the data landscape just in the three years since Docherty took charge at The Data Lab. “I remember reading the original business plan,” she says, “and big data featured heavily, but it’s not a term we hear so much now. We’re more focused on AI, machine learning, computer vision technologies, speech analysis, and natural language processing. Our goal is to increase awareness and understanding of the opportunities they can offer.”

Warriors, not worriers
In March, The Data Lab ran its second annual festival of data innovation, dubbed DataFest. This year saw the introduction of ‘Data Warriors’, people who are passionate about how data can change things, regardless of their background or profession. They could be a cancer specialist, a designer, or a business leader; what they share is a belief in the competitive advantages and occupational efficiencies that working with data can bring about. By making these links across sectors and professions, The Data Lab is fulfilling its three-fold remit of innovation, skills and talent, and community building. Docherty sees the DDI programme as having an important role. “DDI will help everyone to grasp the opportunities generated by data, from basic processing right through to advanced automation and AI.”

This supports The Data Lab’s ambition to increase the scale of its activities, which in turn helps Scotland maximise the value from data throughout its communities, institutions, and industries. Docherty is clear about the potential of the interventions that The Data Lab facilitates. “Working with the DDI programme we can create a rising tide for commercial and public sector organisations in Scotland,” she says. “That’s how we’ll attract new partners to come and build their teams and develop their business here.”

Last year’s DataFest featured John Akred, one of the founders of highly respected consultancy Silicon Valley Data Science (SVDS) and now a senior technician at Apple. Speaking at the event, Akred noted how The Data Lab brings together partners from industry, government, and academia – the innovation ‘triple helix’ – in a way that even Silicon Valley can’t match. “He has a good feel for what’s going on here in Scotland,” Docherty observes, “and he credits us with the ability to get partners pulling in the same direction.”

Building a better life
In addition to strong partnerships and a growing talent base, Scotland houses some of the best data in the world. For example, health data is managed differently than in the rest of the UK, partly due to specific healthcare challenges. These have prompted innovative use of data to develop prevention and treatment programmes for disorders like non-alcoholic fatty liver disease, which affects a quarter of the world’s population but at present has no approved treatment. Scotland’s chief statistician and data officer, Roger Halliday, has led extensive efforts to make health and other public sector data more accessible, which is one reason for the thriving state of Scotland’s life sciences sector. As DDI develops within the wider City Region Deal, there will be even more investment in Scotland’s data capability.

One project in particular highlights the data-driven, partnership enabled innovation that is typical of Scotland’s fourth industrial revolution credentials. As one of eight designated innovation centres, The Data Lab worked alongside its sister centres Digital Health and Care, Censis (the innovation centre for sensor and imaging systems), and Construction Scotland in a partnership with NHS Highland, Albyn Housing Association, and sustainable modular home builders Carbon Dynamics. The project involved building homes in Inverness designed to enable independent living. The homes feature flexible structures and spaces, and have embedded sensors which record occupants’ movement data.
“Data from the project is being used to build machine learning models and algorithms that will look at tenants’ behaviour patterns, to predict things like an increased probability of falling. NHS Highland have been heavily involved in developing the algorithms with the academics. It’s a valuable example of stakeholders working together for the greater good.”

Policy makers tend to favour integrated projects of this nature because of their potential to work across central and local government, economic sectors, and industries. Under the fashionable tag of ‘smart cities’, they aim for joined-up initiatives working seamlessly together. But Docherty is not content with this as a characterisation of the City Region Deal. “It’s more than just a smart city,” she claims. “I think that underplays the ambition of the DDI programme.”

Growing the skills base
Skills and talent make The Data Lab’s second pillar, and it’s an area that has evolved in the last three years. “We have a variety of skills programmes,” says Docherty, “including sponsored MSc degrees, which have grown from 40 students in our first year to 130 this year, across 17 courses in 11 universities. We’ve brought that cohort together for common challenge competitions, soft skills training, and access to industry schemes, and secured more than 50 internships.”
She sees the DDI programme amplifying this work further, including in the potentially big area of continuing professional development and executive education programmes. While the emphasis is often on getting digital skills into the school curriculum, there are a lot of people already in work who need to upgrade their skills.

“Business leaders are aware of the global disruption caused by digital and data, so there’s a willingness to deal with it. That led us to build our executive education programme, which works with business leaders to explain the terminology, share case studies, look at where they are on the digital maturity curve, and help them build the business case for their boards or senior leadership teams to get the funding they need.”

Capital idea
It’s another important step on the road to realising the headline ambition of making Edinburgh and South East Scotland the data capital of Europe. The foundations are in place, built on the skills and talent, the research capability, and the ‘triple helix’ partnerships that The Data Lab has done so much to develop. On top of that, says Docherty, Scotland has the business ambition, the entrepreneurial capability, and a government that “ultimately, is right behind it.”
And she has a message for everyone in the region, not just those who have already joined the fourth industrial revolution. “There are two elements. One is the opportunity. As organisations become more profitable and drive into new business areas, there are no boundaries or borders any more. So, there will opportunity for all.”

But with that comes the second element, the threat of global disruption. “The challenge is that if we don’t this for ourselves, we risk someone else coming along and doing it to us. We could miss the boat entirely, and that would not leave us in a great place, economically or socially.”

True to her optimistic vision, Docherty believes The Data Lab, and the whole of Scotland, is on an exciting journey, which will be lifted to a new level with the significant investment of the City Region Deal coming into the picture. “It is exciting to explore where we can go with that,” she enthuses. “I certainly feel proud that, as a region, we’ve recognised the opportunity and we’re driving towards it. It’s just great.”

It’s true, a fourth industrial revolution is underway, and data is the fuel that will help it succeed. It’s already having a major impact on society, but I’m an optimist, and I think the data-driven revolution presents opportunities and encourages capabilities we’ve never previously enjoyed