Data for Children Collaborative with UNICEF

Since 1946 UNICEF has supported generations of children, from the post war era through to today’s challenging times. As the world changes, so do approaches to helping children: We caught up with Lucinda Rivers, Head of UNICEF UK in Scotland, and University of Edinburgh researchers Isaac Neal and Jodie Brumhead, to discuss how the Data for Children Collaborative is harnessing the power of data to improve children’s lives.

Hans Rosling’s recent book Factfulness tells readers that, believe it or not, the world is generally improving: extreme poverty has almost halved in the last 20 years, 80% of the world’s one-year olds have been vaccinated against some form of disease and 60% of girls in low income countries finish primary school. UNICEF works to advance all these causes by upholding the Convention on the Rights of the Child and delivering on the Sustainable Development Goals. However, according to Lucinda Rivers, Head of UNICEF UK in Scotland and a founder of the Data for Children Collaborative with UNICEF, COVID-19 threatens this progress and has “pivoted everything we do. It is the biggest crisis for children since the Second World War and will be catastrophic for many children. According to research by the Johns Hopkins Bloomberg School of Public Health commissioned by UNICEF, it is estimated that 6,000 additional children are going to die every single day because of the pandemic.”

As the world faces new crises, the development of innovative solutions is essential. Irrespective of this most recent disaster, UNICEF, the Scottish Government and the University of Edinburgh DDI Programme had been in discussions for 3 years about partnering to improve outcomes for children. At the end of 2019, together, they launched the Data for Children Collaborative with UNICEF, which is hosted at the DataLab and funded with £3 million for 3 years by the Scottish Funding Council and the DDI Programme. The goal of the project is to use data science to improve outcomes for children, focusing initially on 6 research themes: nutrition, poverty, population estimation, mental health, climate change and COVID19.

Research for the Collaborative’s poverty workstream is being carried out by Isaac Neal, a Computer Science BSc graduate, and Jodie Brumhead, who recently finished an MSc in Geographic Information Science.

The collaboration of three organisations with different focuses brings a variety of benefits for all involved. Representing UNICEF, Lucinda Rivers discusses how the expertise within the School of Informatics at the University of Edinburgh can support innovation in the way UNICEF might analyse their data. On the flip side, as a researcher, Neal views the clear goals and direction of UNICEF as invaluable: “the end goal of our research is not just interesting research but also something that has real world impact. I think that Is the biggest advantage.” Furthermore, the connection to government enables this research to influence policy and, hopefully, have as wide a reach as possible.

As recent graduates, Neal and Brumhead also discuss the benefits of this collaboration for them as young people beginning their careers. Brumhead highlights the way it has expanded her approach to problems: “There are parts throughout the project where I had always thought about doing it one way, and you talk to other people and realise ‘oh yeah, I could do it that way, it would probably be easier, or that way is better.’ […] There were so many experiences from working on this research project, up and above what you would normally get from a dissertation, that were really beneficial for me.”  Similarly, Neal views his enhanced research skills and knowledge of remote sensing as useful and thinks it is “a good skillset for quite a lot of jobs. It is a real project, communicating with real people, and like I was saying, UNICEF has real needs”

“Data and evidence are the absolute backbone of what we do as an organisation. If we don’t have evidence or data that shows what the issues are for children, we can’t advocate with government, we can’t develop programmes and we don’t know the impact of the programmes we do deliver,” says Rivers. “We are the biggest holder of data for children in the world and conduct the Multiple Indicator Cluster Surveys (an international household survey) in over 100 low and middle income countries. We have more data on children than anyone else in the world, so we have an understanding of the situation for many children , but there are still a vast numbers that are very difficult to reach:  for example they are nomadic or displaced, we often do not have data on these children – which makes them more vulnerable.”

The Data Collaborative population research team are doing their best to find these hidden children by creating a model that can distinguish building types using satellite images and generate more accurate local population estimates. Neal and the rest of the team recently completed their first part of their project, a literature review which highlighted a lack of research using deep learning in bottom-up population estimates – extrapolating a country’s population based on the association between small surveys and images of specific areas. “We are focussing on bottom-up, rather than top-down, because the census data is not usually good, at least in some countries we are focussing on. If you have bad census data, you are not going to get a good population estimate.” Where deep learning was used for building footprint identification, researchers were “idealistic with the data that’s available. We want to work on something like that using less perfect data, or a lower quantity of data, and try to figure out what techniques we could apply to make it more usable in practice.”

The poverty workstream focusses on mapping children’s access, measured by both distance and time, to key services like clean water and health clinics. Brumhead worked with the team as she wrote her dissertation on “Testing the utility of displaced DHS data for measuring travel time to essential services.” Essentially, because survey data are displaced to preserve anonymity it is important to account for this displacement of data points when trying to measure access to amenities: “when you are looking at access to services, quite often these points are suddenly displaced to the middle of a forest. So, if you measure access from the middle of a forest rather than a household it is likely to have quite a big impact. I am trying to figure out the impact of that and how we can reduce it.”

These projects show just how important data is, but also that it is imperfect, and it is often the most vulnerable who are missed as a result of these deficiencies.

Looking to the future

Both Brumhead and Neal see broad applications for their work. Brumhead is mapping poverty in Uganda, but, she says, the “hope is that it can be repeated for other countries and that is the case with everything I have been doing. It is really repeatable for other countries as well.” Neal is working to develop population estimates in Mozambique and says, “if we could actually get a really good population estimate for Mozambique and not focus on the broad use of this thing it is still a huge achievement in the sense that it is a big country and that would be great […] Once you have done that you can move onto a new country and rather than just applying what you already trained in Mozambique, you can do another survey and you could add that to the model. As you move through countries, the model will perform better and better and eventually you might have this general model of population. It would take a huge amount of data, but it is possible that you could have a model that say works for the whole of Eastern Africa – a region where you can year after year feed in images and it will tell you where people live. That would be the ultimate goal, but I don’t want to get ahead of myself.”

Within the broader remit of UNICEF, Neal believes the research could be used to help policy formation on relating to  where people live; “I think there is going to be a heightened need to locate children who need vaccinations in the next few years and I think this project could serve a useful component for that.” Replacing vaccines missed due to Covid-19 is just one of the many issues UNICEF is dealing with along with tackling climate change, protecting mental health, delivering water and sanitation supplies and education, and responding to cyclones in Bangladesh and locust plagues in Ethiopia and Somalia. Tackling these issues is not an enviable task, but Rivers says: “It is important that we are able to respond quickly to these fast moving emergencies and good data and insight is vital to enable us to respond quickly and appropriately.”

The goal of the project is to use data science to improve outcomes for children, focusing initially on 6 research themes: nutrition, poverty, population estimation, mental health, climate change and COVID19 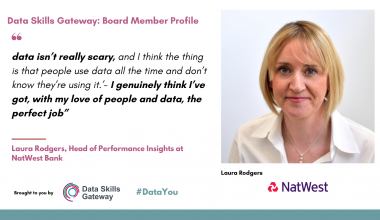 From a young age, Laura Rodgers, Head of Performance Insights at NatWest Bank, has been… 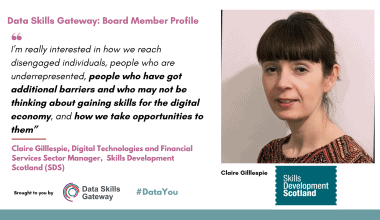 Claire Gillespie is the Digital Economy Skills Manager for Skills Development Scotland (SDS).  While she… 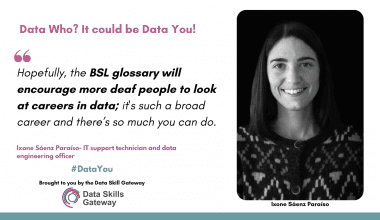 Ixone Sáenz Paraíso is an IT support technician and data engineering officer. She is also…